Gentlemen of the Road/Island Records

One of my clearest and sourest memories from high school comes from when I told a friend that my favorite band was Mumford & Sons. This friend was a talented and hardworking jazz musician, one whose musical opinions I valued. He scoffed and said, of my most beloved band, “They can’t play.”

I was heartbroken. I probably came home from school and aggressively listened to Sigh No More, their only release at the time, and sighed much more, and thought: This was great music. These men were geniuses. My friend was mistaken.

He was not mistaken.

The band’s latest two albums signal a sadly permanent departure from their debut folk/pop sound, a formula that stole the hearts of white people around the world. But now Mumford and his sons have forayed bravely into the world of… mainstream pop mixing. And while, by definition, this sound works out commercially for most who adopt it, the make-your-own-Coldplay kit doesn’t fit for Mumford & Sons.

END_OF_DOCUMENT_TOKEN_TO_BE_REPLACED

Lately I’ve been obsessed with two things, and two things only: The music video for “Fallingwater” by Maggie Rogers and the music video for “Big God” by Florence and the Machine. Both are songs that express unfillable needs and unfathomable sorrows. Both are videos that use motion and the body to interpret these enormities.

Released within a month of each other, these videos look different but feel similar, or at least analogous. Where “Fallingwater” is light and airy, “Big God” is dark and dank. Where one is youthful and innocent the other is sensual and even grotesque. But they both place the artists in big, homogenous landscapes, on their own, with nothing but their own emotions to contend with.

END_OF_DOCUMENT_TOKEN_TO_BE_REPLACED

In a deviation from the series’ preferred flavor of hopelessness, “USS Callister” offers us two experiences best served hand-in-hand: a delightful romp, and a deep, hard look at ourselves. (Content warning: Straight-up feminism.) 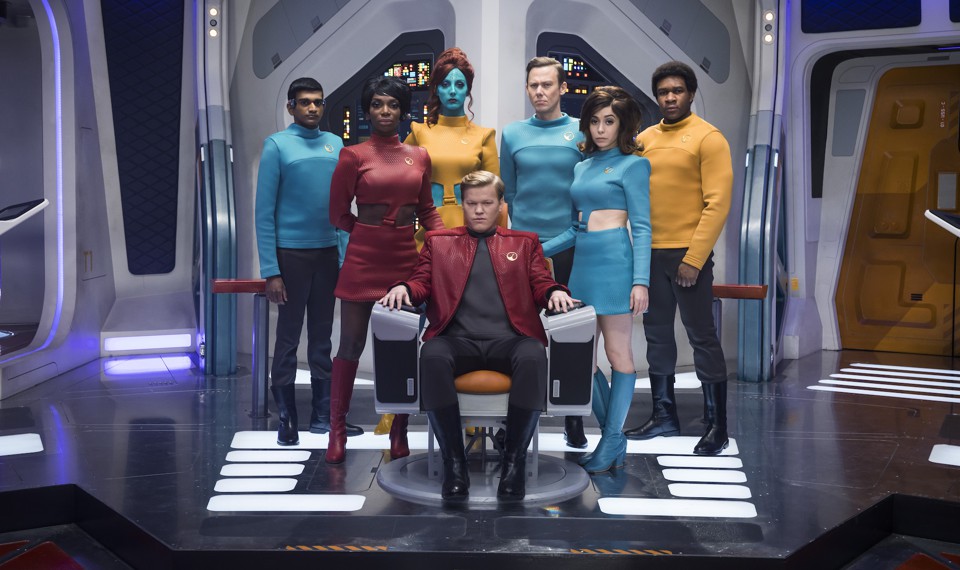 The wise and powerful Anita Sarkeesian, media critic and executive director of Feminist Frequency, often says that it’s important to be critical of the media that we love. It’s easy to dismiss serious flaws in a text that you deeply admire so that you can go on admiring it without shame, just as it’s easy to assume that people who criticize that text must hate it. But it is hard to engage critically and thoughtfully with the media you least want to criticize — and, when possible, to demand better from the people producing the work.

The difficulty of critiquing beloved media doesn’t just come from the uncomfortable tummy feelings it can give us — fans who are over-loyal to a work may reject, even attack, the people pointing out its flaws. And when these flaws are a product of misogyny, and when the people pointing them out are women… oh man, does it get heated.

Nowhere is the tendency to attack the feminist critic more hair-triggered than in nerd culture. Sarkeesian herself is the subject of constant global abuse because she is a human woman who has opinions about video games. Nerd fandom is at once inordinately loyal and deeply insecure: We tend to latch onto fantasy and sci-fi media from a young age, when we’re just as likely to over-invest ourselves in fictional characters as we are to be mocked for our interest in them.

So when women in particular begin to demand better of their favorite media, they can receive ugly combinations of reactionary nerd rage and blatant sexism. When you add this to the systemic shortcomings of literally all entertainment media, geek culture, despite being thought of as a bastion for the uncool, quickly becomes not so fun for the women who are part of it.

In Black Mirror’s Season 4 debut, “USS Callister” offers us not only an exploration of this toxicity, but also a richly textured and rewarding visual experience that critiques a beloved cultural franchise just as it pays homage to it — in short, is critical of the media it loves.

END_OF_DOCUMENT_TOKEN_TO_BE_REPLACED

Note: This is a deviation from the usual content on Critical Mess. But as it says right up there in the header, “Everything is text.” And today, “text” includes epidemics of punctuation errors.

My resume says I have a “passion for appropriate hyphen usage.” This isn’t me trying to be cute. This is just a fact. Hyphens are my personal windmills. Every day I tilt at examples of their misuse on the internet, wailing and railing and ultimately failing to change anything. When I’m done wailing, I take a screenshot of the offense and drag it into a desktop folder entitled “Word Crimes.”

For some time now, the worst repeat offender has been the Unmoored Compound Modifier. When two words work together to describe one thing, that is called a compound modifier, and it is compounded with the aid of your friendly neighborhood hyphen. All too often, though, your friendly neighborhood hyphen is neglected and left to sulk at home. Do you know how many “award winning journalists” are not award-winning grammarians? So, so many.

END_OF_DOCUMENT_TOKEN_TO_BE_REPLACED

The only worthwhile part of the Girls finale was its first 100 seconds. In the opening shot, the camera tracks over a bed, and two pairs of legs entwined on top of it. We see, when the dolly comes to a stop, that Marnie (Allison Williams) is sleeping softly behind Hannah (Lena Dunham), who awakes with a start and asks how Marnie got into her home while she was sleeping.

It’s a perfect (though mirrored) replica of one of the very first scenes of the series. In the pilot, which aired over six years ago, the camera panned over the same nested bodies. But in that episode Hannah was the big spoon, and neither woman was surprised to find the other there when they woke up. Even the music playing through these bookend scenes was the same. It helped to highlight the fact that Marnie has been Hannah’s one constant throughout the series — a point that Marnie herself has no problem driving home in the finale. END_OF_DOCUMENT_TOKEN_TO_BE_REPLACED

Sometimes, Buffy episodes are nonsensical dream sequences with repeat appearances from an unexplained Cheese Man. Sometimes they are thinly veiled metaphors for teen hormones wherein the spirit of a hyena demon infects a gang of high school boys, who proceed to eat their principal alive. Other times, though, the show does away with humor and absurdity altogether, and takes 45 minutes to talk about difficult, painful, important issues. “Seeing Red” is one of these episodes. Depression, toxic masculinity and gun violence are the main plot drivers. Victimhood, grief and recovery are their outcomes. END_OF_DOCUMENT_TOKEN_TO_BE_REPLACED

I know I’m going to ruffle the feathers of a few Buffy snobs when I choose to write about an episode in Season 4 that is not “Hush,” but this series is called “My Favorite Patrols,” not “The Objectively Best Patrols,” so sit down.

This season is one of the best of the series. The transition from a high school setting to a college one doesn’t always work with a hitherto static cast of characters — especially in a show that relies so much on comedy — but in Buffy‘s case the Scoobies’ graduation probably saved the show from stagnation. The characters had long since outgrown the storytelling confines of primary education, and freeing them up to larger portions of the real world allowed them to grow and morph in delightful, disappointing, and even terrifying ways.

But what really sets this season apart, what makes it first in my affections, is a finale that makes absolutely no sense in context with pretty much the rest of the series. It marks a change from traditional season setups, where the finales are usually reserved for the height of action and drama. Instead, “Restless” serves as something of a debrief, space for the characters to relax from the last episode’s hijinks and for the writers to set up major themes to come in Season 5. (Game of Thrones has, notably, picked up on this format.) END_OF_DOCUMENT_TOKEN_TO_BE_REPLACED

For the past week, the web has been awash in thinkpieces about Buffy: The Vampire Slayer, the series that debuted 20 years ago and changed the course of American television forever. That is not an exaggeration.

Buffy was one of the first shows to commit to season-long story arcs, with every episode containing its own adventure while being housed within a larger succession of chapters that led to stunning season finales. It was also a pioneer in its exploration of genre. Buffy Summers was a fabled fighter of dark, supernatural forces, but she was also a teenager. Her show was just as full of awkward romances and memorable witticisms as it was with stabby-stabby action sequences. And, of course, Buffy as a show was uniquely feminist, launching a tradition of badass warrior women that continues to dominate entertainment to this day.

Being a little before my time, Buffy didn’t really enter my cultural consciousness until my freshman year of college, when my best friend forced me to watch an episode with her. The following summer, I blazed through the entire series in a number of weeks, and have probably watched all seven seasons at least three times through. I am not proud, but I’m also not super ashamed, either.

So for the next week, to celebrate 20 years of Buffy: The Vampire Slayer, Critical Mess is going to join the worldwide party of Buffy appreciation. Plenty of people are talking about the episodes that boosted the show’s acclaim. The Season 2 finale “Becoming,” “Hush,” “Once More With Feeling” — these are all the best episodes, but they are not my favorite episodes. Every 42-minute segment is as deserving of critical attention as the popular ones (except for, perhaps, most of Season 1, when the show was still trying on a bunch of weird outfits). END_OF_DOCUMENT_TOKEN_TO_BE_REPLACED

It’s not very often that one listen to a new song has me typing in a furious, feminist rage by the middle of the second chorus. But the eighth song of Ed Sheeran’s Divide, released Thursday, got me there.

Don’t get me wrong, I’m loving this album. Rather than sticking to whatever formula got the most radio play on Multiply and beating it to death (lookin’ at you, Jason Mraz), he’s continued to explore the several distinct but connected sounds that make him so satisfying to listen to. Songs like “Shape of You” indulge fully in his clear affection for hip-hop, while “Galway Girl” and “Nancy Mulligan” spin Irish reel–inspired melodies that have you stomping your feet and smiling compulsively.

But while his sound has continued to grow and mature, Sheeran’s content seems mired in the same teenage angst that made him famous with Add, and then some. “Eraser,” the album’s opening track, finds Ed complaining once again about how hard it is to be rich, famous, and living the dream. “Castle on the Hill” is the slightly better version of that, though his vignettes of friends’ everyday English lives are unremarkable and clumsily worded.

END_OF_DOCUMENT_TOKEN_TO_BE_REPLACED

At the end of the first episode of Westworld, I was enthralled, and so ready to jump onto this adventure. Robot narratives that question the nature of sentience and humanity are hard for me not to enjoy. But when the 90-minute finale concluded on Sunday, it was to a faint and jumbled echo of the thrill I had felt ten weeks prior. In terms of sheer entertainment, Westworld failed to escalate far beyond the excitement that its first episode promised; but more importantly, a story that purported to explore questions of identity suffered its own identity crisis. The show never grounded itself in a moral or intellectual core, instead leaning heavily on the ideas of these things. And when the ideas deflated under their own weight, the story fell flat. END_OF_DOCUMENT_TOKEN_TO_BE_REPLACED